Temporary Events are only available for a limited time period. The player beats challenges within this time period to get unique items. Missed unique items can be purchased at the Item Dump.

There is no way to go back to a closed event.

There are two kind of temporary events.

In addition, there are also small Passive Events where the game rewards bonuses like double white orbs and double Bounties for a short time. 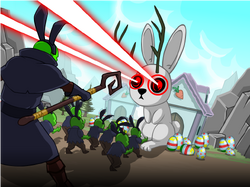 The Easter Event was a small event integrated into the Amero Kingdom consisting of three challenges. It was available from 22th March to 3rd April 2016. All symbols were based on Easter. 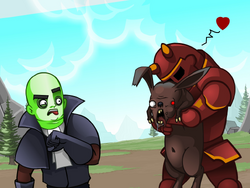 During this event, players collect eggs by destroying houses. They drop randomly, and drop rate does not seem to be affected by the current level. These eggs could have been traded with the Red Knight on the Amero map for powerful items. 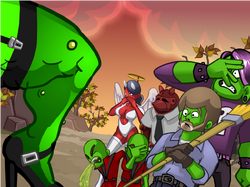 The update was announced in v.1.03.017 along with placing closed Ancient Portal in which one could suggest one's ideas for costumes and get exclusive hat for participation.

The Halloween Event was the first to have its own realm. The event was available from 13th October to 11th November 2016. 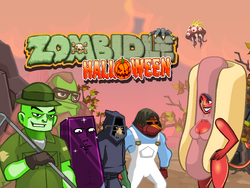 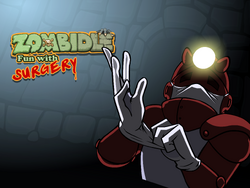 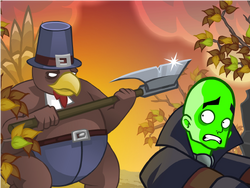 The Thanksgiving event is a small event which was integrated by a new Challenge in Amero Kingdom. The event was available from 25th November to 8th December. All symbols were based on Thanksgiving. 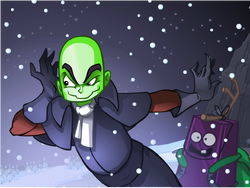 The Christmas Challenge is a big challenge which has an own realm. The event was available from 8th December 2016 to 19th January 2017. 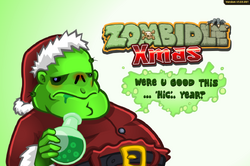 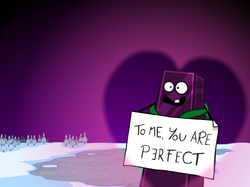 Valentine's Day features no challenges or own realm, but it has new currency and new shop that is located in Amero Kingdom. The event was available from 9th to 23rd February 2017. 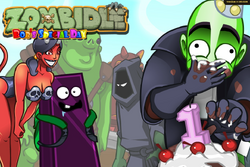 The Anniversary Challenge is a big challenge which has an own realm. Each challenge must be beaten to progress next one, it has no normal locations. What are you waiting for, go there right now!

During this day player would receive a "Raid" notification like Twitch or Scroll notification. The message was:

"You've been raided by another player! You were attacked while offline! The other player stole X orbs and X skulls from you! To get back your items, click the button!"

"Connection failed: PewPlay not implemented yet! :(".

If you cancel by pressing cross icon instead of "Retaliate" then you will get this message:

"You let the enemy get away with it! The minions depend on you! How could you... :("

Day Off At Burrito's[edit | edit source] 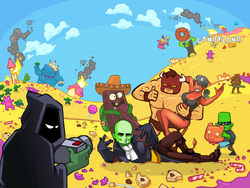 Main article: Day Off At Burrito's

Mix of Zombidle and Burrito Bison which has been created by Juicy Beast studio. Collect Jelly Beans and squeeze some gummybears!

Portal to Candyland is located in the Amero Kingdom and at the World map.

Strange feathers have recently been showing up all over the world. Collect as many as you can and get precious rewards!

The Land of Turtles[edit | edit source]

Main article: The Land of Turtles 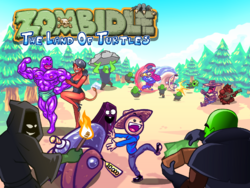 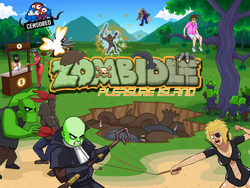 Welcome to Pleasure Island! Enjoy the walrus pit and the rebuilt Crab Parlour! Just try to avoid anything that looks like more than one animal.

First console game Just Shapes and Beats is celebrating its release. Join the celebration for just beating the shapes out of their beats... for shapes. 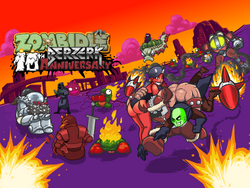 This event Berzerk Studio celebrate their anniversary and it includes many references to their other projects. Collect Bolts (which are named Nuts for some reasons) to get Berzerk rewards!

Portal to Berzerk World is located in the Amero Kingdom and at the World map. 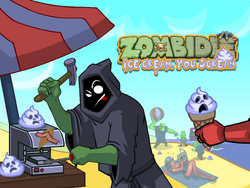 It summer! It is time to collect weirdly shaped ectoplasm and sell them to The Black Lich for his time portal research. In exchange you will receive items that decrease ghost crafting time!